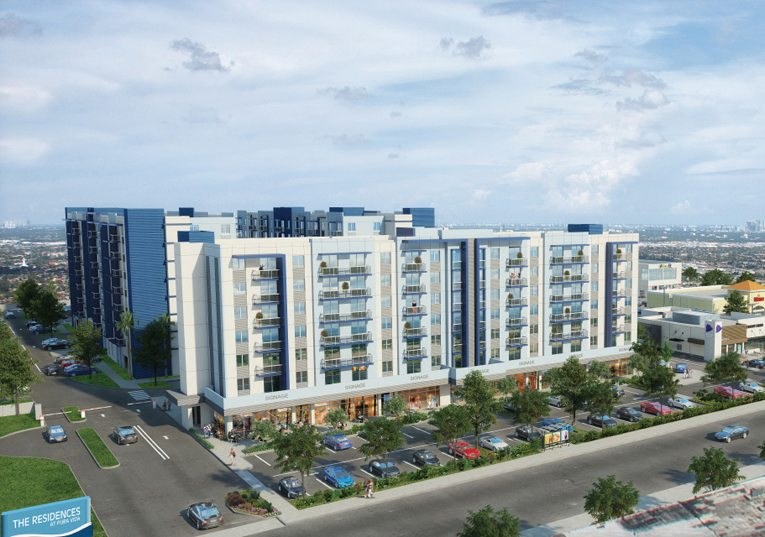 A group of developers that includes Michael Wohl, Stephen A. Blumenthal and Oscar Rodriguez unveiled plans for a $70 million mixed-use project in Hialeah that will replace a mobile home park.

Pura Vida Hialeah will consist of two, 8-story rental towers and one, 7-story rental building fronting 16th Avenue, which will feature about 11,000 square feet of ground floor retail space. The apartments will feature a mix of studios, one-, two-, and three-bedroom units. One-bedroom apartments at Pura Vida Hialeah will average about $1,300 in rent, Coral Rock Development Group’s Michael Wohl said. Amenities include a resort-style pool, a grilling area, gym and dog park.

Retailers like Dollar Tree, YouFit Health Club, Taco Bell and and the gas station/convenience store Wawa have signed on to the project.

Arena Capital’s Oscar Rodriguez said the retail portion is being built out and site work is underway for the apartment portion.

The group plans to go vertical next year and complete the project in 2020.

The partners paid $12 million for the site in March. So far, about 20 mobile homes owners remain on the property. The residents were notified in April and have been relocating, many to affordable housing units developed by Pinnacle Housing Group, Wohl said.

The developers are in talks with BB&T to secure financing, according to Rodriguez, who declined to provide an amount.

Wohl said he’ll remain an investor in Pinnacle’s existing communities and at least five of its projects planned or under construction, but will now focus on building mixed-use projects with multifamily and retail components.